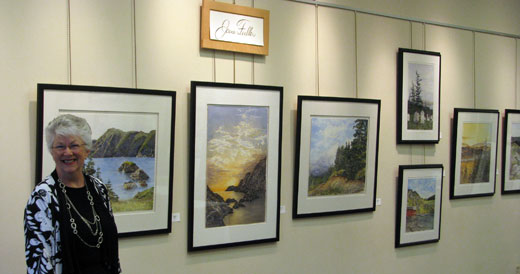 The culmination of a trip to Newfoundland in September of 2010 was the artist’s first solo show of original watercolours in October 2011.

A year ago I discovered a new found land. The works in this show represent my first visit to Newfoundland and the impressions I took away from that unique experience.

Newfoundland was quiet when we were there last September. Most of the tourists had left; the townsfolk were getting their wood in for the winter; and fishermen had been called off their nets. All seemed quiet, perhaps even tranquil, occasionally serene and almost always unexpected as we traveled from place to place. There were six of us in all -- artists traveling in a big black van and spilling out at every turn in the rain, drizzle, clouds and wind, all interspersed with occasional sunny breaks. Hurricane Igor in the meantime was threatening his way up the coast setting up the rock for some very significant atmospheric disturbances.

The power of the landscape was rugged, dramatic and harsh,. It tells its own story while at the same time embracing spires, fishing stages and cemeteries. For me, one of the most exciting and inspiring aspects of landscape painting is a reaction to the astonishing variety of effects of weather. The rapidly changing atmospheric conditions may have no better equal than in Newfoundland. The effects of weather, whether sunshine, clouds, mist, or fog on this background are central to my work in A New Found Land. Sketching and painting en plein air were not without their challenges. Photography, however, was my backup to help capture the play of light on hills, valleys, rocks and water; the dynamics of sun and shade; and the subtleties of fog and mist.

The diversity of weather effects and the quiet resilience of Newfoundlanders have left an indelible mark on my art and inspired me to create this independent body of work on a singular theme.

Feedback from the show

Jane, me maid, what a smacked-up job you’ve done painting the essence of our wee island. We’s some proud of you, even if you is a mainlander!!!!

—Alice from around the bay

I love Newfoundland and you have captured it well.

Artist Profile by Colleen Winter, Published in the January/February 2012 issue of Good Life in the City magazine, Barrie, Ontario. www.goodlifebarrie.com 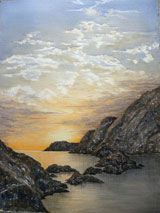